How Forex is the Least Affected Market During COVID-19 Pandemic

Besides a significant loss of lives, the ongoing COVID-19 pandemic had also had a significant effect on the world economy. Some financial experts are already discussing the possibility of the upcoming 2008 style Great Recession. In those times it is curious to discover that the Forex might be the least affected market by this pandemic. Firstly, let us take a look at the Stock Market. By February 12th, 2020, the Dow Jones Industrial Average reached another all-time high level of 29,551. As the virus spread and the death toll increased, the stock prices started to fall dramatically. By March 23th the Index declined to 18,592. This represents a 37.7% fall from February high levels.

People who have been heavily invested in DJIA indexed funds or had a balanced portfolio from those 30 stocks which are included in this index, could have lost more than 1/3 of their net worth in less than two months. We have a similar picture with the S&P 500, which has lost 33.8% of its value during the same period. The Dow Jones Industrial Average and other stock market indices recently recovered and regained some of the lost ground, however, there is no guarantee that decline will not resume. In fact, Axel Merk, the Chief Investment Officer of Merk Funds, in a recent statement, compared buying Stocks as ‘trying to catch a falling knife’. 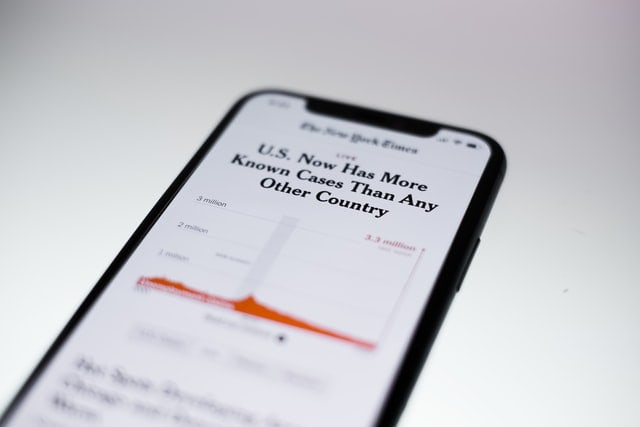 In order to get some idea, how this compares to Forex, let us take a look at some of the most popular currency pairs. On February 12th, 2020 the EUR/USD traded near 1.09 mark. As the Federal Reserve cut the Federal Funds Rate, the Euro appreciated approximately 5%. However, this was a short-lived rally, the single currency surrendered its gains in a matter of days. As of April 8th, the pair still trades around 1.09 level. Since there was so little variation in the EUR/USD exchange rate, let us try to find more volatile pairs. For example, during the same period, GBP/USD has fallen by 11%, but even hereafter reaching 35-year lows with the dollar, the Pound regained at least half of its losses, currently trading at 1.23.

At the beginning of March, another major Forex pair USD/JPY has fallen by 5%, but just like in the case of EUR/USD after a couple of weeks status quo was restored. As we can see from the example above the pandemic had much less effect on Foreign exchange rates, than Stock Market prices. In times of crisis and uncertainty, the majority of investors and traders are looking for relatively lower risk and volatility. The Forex market can be one helpful alternative. For example, one way to do this is to use the mt4 download feature.

Why is Forex Market Less Volatile During Virus Outbreak?

There are 5 possible reasons why foreign exchange rates have been less volatile than stocks and some other assets. Let us go through them:

Lower volatility is beneficial in the sense that it puts some limit on potential downside risk, but at the same time still give enough opportunities for earning a payout.